This is an excerpt from Exploring Scrum: The Fundamentals.

I will describe the roles of the ScrumMaster’s in the context of the team maturity model14, which says that as a team matures it goes through four phases: forming, storming, norming, and performing, which are briefly defined as: 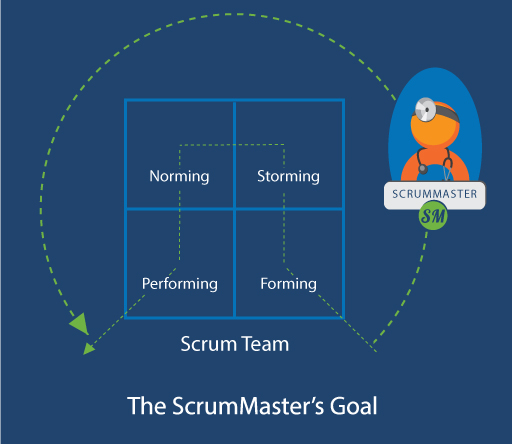 This model makes it easy for me to describe the ScrumMaster’s primary goal, which is depicted in above. This goal is to get the Team Performing as quickly as possible, and then keep it there, or maybe even push it further towards hyper-Performance, which is when the Team is doing so well the ScrumMaster becomes ‘invisible’. In any case, this means that the ScrumMaster is constantly helping the Team Members deal with, and fight through, the environmental forces inside and surrounding the Team, in order to help them improve.

Now, this is actually a pretty simple description of the ScrumMaster’s job, but it leads to some significant discussions about what it means and how to do it.

Not only that, but there are many aspects (sub-roles or responsibilities) of the ScrumMaster role.  Each of these sub-roles is familiar to us, but the combination of them is special.  There is no official list of these various responsibilities, but here are some of them that I talk about when coaching ScrumMasters:

The ScrumMaster is constantly working with the Team, helping it get better, facilitating its self-organization, and assuring that it follows the Scrum process.

The ScrumMaster acts as a referee in most internal disputes on the Team.  This is a special case of the Facilitator role, but is common enough that it needs to be called out separately.

The ScrumMaster acts as the conscience of the Team, especially when it comes to the Team Values I described in chapter 2.1. When a Team Member (or the Team as a whole) is not living the Values it is the ScrumMaster’s job to make this fact visible and try to do something about it. This often, but not always, causes the ScrumMaster to call for an Intraspective (discussed later in this chapter) to discuss the issue with the Team.

The ScrumMaster is not simply a collection of these sub-roles, though. The basic idea is that the ScrumMaster will do ‘whatever it takes’ to help the Team get better so that the Team can do the work the Product Owner requires of it.  When I coach ScrumMasters, I constantly enjoin them to ‘make it work’ no matter what is going on.

Because of this ‘make it work’ attitude the ScrumMaster often needs to take the cultures of the Team and the Organization into account. There is no ‘one size fits all’ guidance to give a ScrumMaster – it is all situationally dependent. Not all ScrumMasters are appropriate for all Teams, and ScrumMasters must be constantly self-evaluating to determine if they are being effective. If they are not, they owe it to their Teams to get themselves replaced.