Everything I Needed to Know About Scrum, I Learned from Jazz

Okay, so that’s not entirely true. I didn’t learn Scrum from jazz. But it wouldn’t be such a stretch if I were a musician. Need proof? Take Peter Green, for example. Peter is a professional jazz musician turned ScrumMaster and Certified Scrum Trainer.

I was lucky enough to catch Peter’s open space session on Scrum and jazz at the New Orleans Scrum Gathering earlier this year. I was amazed at the parallels he so clearly drew between these two passions of mine. How had I missed these correlations?

I was reminded that sometimes the best way to illustrate the tenets of Scrum is outside of software development, allowing us to wipe away all the baggage and preconceived notions we have about project management, giving us a chance to look with fresh eyes at some of the basic elements that make Scrum work. 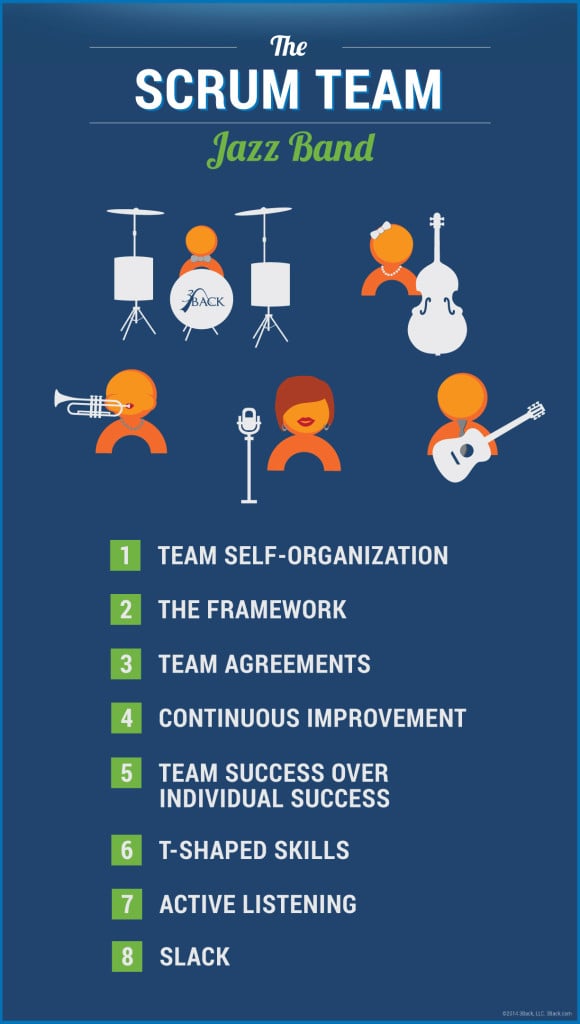 Good collaborative musicians are adept at self-organization. Without self-organization, it would be chaos. At worst, they might never even get past setting up. At best, the music would be mediocre and lifeless. The talking that you might hear during a jam session? That’s self-organization. It sounds something like this, “Hey man, how about when you play that bit, bedop bedop, I go deedily debop a di and then we bring in the bass?”

I watched this self-organization occur first-hand at Peter’s open space session when he brought in three local musicians he’d wrangled up the night before. They’d never played together before, yet were able to play beautiful music immediately. But it wasn’t all thanks to the self-organization; they had a solid framework and team agreements to rely upon as well.

Even with a bunch of self-organizing jazz musicians, you can’t start entirely from scratch. A good framework is imperative, something to set the stage and lay some ground rules. This is not only critical for the ones doing the work so they know they’re showing up to play jazz and not bocce ball, but also just as critical for the end user so they’re not expecting opera. The framework sets the expectations and basic structure without restricting our future actions too much. That’s why it’s important to keep the framework lightweight. Can you imagine the jazz that would come out of an overly prescriptive methodology?

Among jazz musicians, there’s a whole set of unspoken team agreements. They’re handed down as part of the trade and cover everything from when to show up, to who decides which songs to play, to how long those improvisational solos go for. Knowing the team agreements is the difference between being an amateur and being a professional.

Just because you’ve got a good framework and understand the team agreements doesn’t mean you can stop there. The framework is only as good as the musicians implementing it. A good musician strives for mastery over the course of their lifetime, developing, defining and redefining their skills all along the way. A good musician knows that in order to strive for mastery of the music, you must go beyond mastery of the framework.

While each good jazz musician is striving for mastery, they understand the importance of not trying to outshine or overshadow their teammates. They know that if the whole band doesn’t look good, than none of them look good. They help each other along the way and are more concerned with the success of the project than the perceived success of a single member.

While many jazz musicians are virtuosos of their chosen instrument, the best musicians also have a solid understanding of multiple instruments, types of music and techniques. This broader array of skills allows for more effective collaboration and improvisation with other musicians.

Collaborative musicians are constantly engaged in active listening. I mean they really listen to each other, all the time.  They do this constantly, with almost all of their senses and then they think about how their own response fits in.

In music, the down time (or silence) is just as important as the notes that are played.

It just goes to show, Scrum is all around us. The same core beliefs, values and actions that occur naturally in other environments, such as music, are the same ones we struggle with every day in software development. It’s important to remember to step back sometimes, simplify and look at things from a different perspective. Take a breath, listen to the music and hear what it has to teach us.