How To Solve Toxic Team Norms

How is it that Teams sometimes encourage people to be less accountable, in the guise of caring for them?

As Dan Rawsthorne and Doug Shimp described in The Well-Formed Team™, Team Members do whatever chores are needed to support the work they are supposed to be doing, and are given slack but don’t get to slack off. The expectation is that everyone values the group’s teamwork and constantly works to improve it.

However Business Organizations, like families, sometimes develop their own bizarre internal logic that – while it would never fly in the real world – becomes a norm within the organizational “family.” These norms are surprisingly tough to change, because “that’s just the way things work here!”

Even worse, bad norms get mixed up with “how we take care of each other on the Team.” At that point a “perverse incentive” starts driving the Team. We show we care about each other by not treating each other like adults. That is, by not expecting each other to be fully responsible for our part in getting the work done, instead of holding each other accountable–humanely, but firmly–when the ball gets dropped.

One prime example of a dysfunctional Team norm is what I’d call “inverting” or “flipping accountability.”

Bill and Amy are collaborating on a project. They’ve scheduled a project meeting for Bill to deliver his next piece of work on the project, but when Amy arrives, Bill tells her–”I couldn’t come up with anything…just tell me what you want, and I’ll do it, OK?” 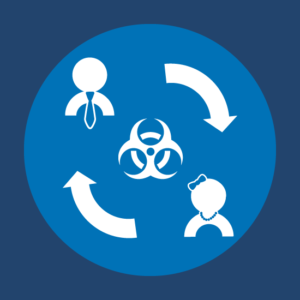 Instead of giving the work his best shot and fine-tuning the results with Amy, he’s flipping the accountability. Without saying it directly, he’s made his work Amy’s responsibility. If she takes that on–which is easy to do in the heat of the moment–Amy will instantly be burdened by an extra responsibility that wasn’t hers. Now it’s up to her to take on not only her own accountability but Bill’s as well.

Why do we go for this?

Sometimes the pressure we feel to deliver results, our desire to avoid conflict with a coworker, or even our desire to help him/her out, can lead us to allow the accountability to flipped this way. So what’s the big deal?

Why Inverting Accountability Is So Toxic

The problem is that when accountability regularly inverted on a Team, more than just single pieces of work are at stake. Instead, a norm is being set for how impediments and responsibilities are handled; namely, inverting or flipping the accountability to escape responsibility. That becomes an “instant norm” that can permeate a Team and prove very difficult to correct. And most importantly, it’s toxic to collaboration, because people like Amy quickly learn they can’t count on their Team Members to deliver.

It’s easy to throw WFT norms out the window if the pressure to deliver is intense. The point is to keep working to build the kind of Team everyone want to work on.

Are your Team norms toxic?
We’ve got expert Scrum and
Agile coaching for that.