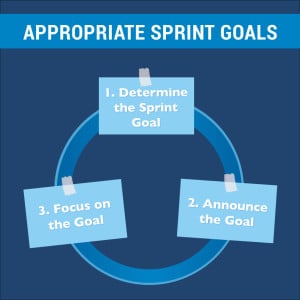 As a part of Agreement-Based Planning, the Team should decide on a Sprint Goal, which will define the ultimate success or failure of the Sprint. The main purpose of the Sprint Goal is to provide a focus on something besides finishing all the Stories and provide wiggle room for the Team to work within. This is important for many Teams because, without it, the Team’s de facto goal is to finish all the Stories they forecast – and this pressure to finish all of them often leads to the unintentional creation of Technical Debt. Having something else to focus on that defines success allows the Team to do the work necessary to get the Stories done right.

The Sprint Goal should be determined by the Team at the end of Sprint Planning, even though it may be discussed with the Stakeholders at the Review.  I like doing it at end so that there isn’t a long, protracted discussion about it. Since Sprint Planning is time-boxed, holding it at the end limits the amount of wrangling the Team can go through about it.

The Sprint Goal defines success for the Team, and can be about Product, Process, or People. Most people think the Sprint Goal should be a subset of the Release Goal, or a milestone along the way, or something like that. I think that is too narrow a view. I think that the Sprint Goal is what is actually important in this Sprint, and this is not always about the Product. Let’s just see some examples of Sprint Goals.[contextly_sidebar id=”3FM58j00m8GGByE0vtMq7dPHmlIqQSUl”]

This concept is discussed in greater detail in chapter 4.2 of Exploring Scrum: The Fundamentals which you can purchase on Amazon.