We practice Scrum at our workplace. We use it to complete complex projects. We appreciate its flexibility, its visibility and its inherent collaboration. We value our PO who prioritizes our journey down the road, our ScrumMaster who removes any bumps in the road, and of course our Team who develops an easy and efficient cadence as we travel down that road.

But, what about Scrum outside of our own workplace? Does Scrum’s Agile framework lend itself to a world outside of our chosen industries? We know that Scrum does not live in a vacuum. It is not merely a theoretical process to be debated. The principles of Scrum are uniquely transferable to everyday real life. And there are examples of Scrum in real life all around us.

As I started to think about real life examples of Scrum, it occurred to me I had my first taste of Scrum at the tender age of 16. Little did I realize that my first official job as a short order cook was really grounded in Scrum principles (and a whole lot of grease). But it really was.

We had our Shift Manager (our PO) who started every dinner rush shift (or Sprint) with a quick Team meeting (or Standup) which included an overview of what was going to be happening (or Stories) during the shift, such as testing a new way for us to answer carry out phone calls before the third ring. Also at this time everyone shared what tasks they were undertaking. (I liked to man the fryers and I requested this task often. I especially gravitated towards this task when my favorite people were scheduled that night. We helped each other out and things just got done. A primitive version of Team Swarm.) There was a Team Leader (or ScrumMaster) who always seemed to have our backs, alerting us to anything unusual, like a catering order where she would make sure we had some extra help. We were also reminded of the shift goal (Sprint Goal) of getting the food out faster, for example, which was agreed upon at the beginning of the week when the schedule had been set (Sprint Planning). At the end of a grueling dinner rush, after the kitchen was cleaned up and the whole Team had time to take a breath, we regrouped to talk about the good, the bad and the greasy from the rush (Sprint Review). We also discussed what we would do differently next time, like prep more to-go containers for the large catering order (Sprint Retrospective). And you know what? The catering order the following night went much more smoothly. Scrum in action at my first job… who knew? 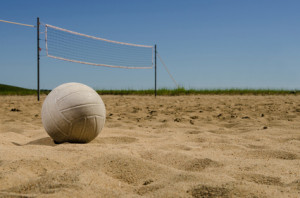 Moving on from tales of my teenage life to my hard core endeavor into post secondary organized team sports, memories of my sand volleyball team screams Scrum in action. My friends and I while in our twenty somethings decided to join a sand volleyball league. If I recall, the love of the sport was a minor reason for becoming a team. I think we were more into it for the love of appearing somewhat sporty and the love of an excuse to hang out in a beach-like, happy hour setting on a weekly basis. Regardless, we donned our matching tee shirts and became a team. Or so we thought.

We masterfully lost our first game. After a necessary drowning of sorrows, we took a deep breath, dusted off the sand that had accumulated everywhere and spent some time as a group discussing what just happened. Little did we realize this was really a rudimentary Sprint Review with some Sprint Retrospective thrown in. Where did we go wrong? We weren’t thinking as a Team. We were thinking as individuals on a sand court. We were blindly going after each ball, without a plan, without a unity of focus and without a collaborative spirit.

[contextly_sidebar id=”65oxNitPL83SOcvM7d8532bdLn5Oq7wB”]We needed help. And, this help came to us in the form of Scrum, though we didn’t know it at the time. We needed a coach (PO), who understood the game, understood what the Sand Volleyball League (Stakeholders) expected of us and could guide us towards our goal. We needed a goal (Sprint Goal) that we all agreed upon and that could be modified as our competency improved over time. We quickly realized our first goal shouldn’t be “Win Big,” because not only was that unrealistic, it didn’t speak to the team spirit we wanted to build game on game (Sprint on Sprint). We needed a Team Captain (ScrumMaster) who focused on that team spirit by being our internal eyes and ears, not to mention our sore muscles, to realize when we needed help (Identifying Impediments) and get us that help once it was realized. And we needed practice. Lots and lots of practice to foster a natural community and build rhythm that sustained our efforts (Velocity).

Whew. We needed a lot. But with a little Scrum on those sand courts, we eventually figured it out and got the job done. Toward the end of the season, “Win Big” did become a goal and we achieved it.

Now, in the present tense, several real life examples of Scrum in my day-to-day world rise to the surface. One example of a tried and true Scrum Artifact comes to mind. It’s an Artifact that I use on a regular basis, usually with successful results. It’s my Honey Do List, my family’s Sprint Backlog containing a list of household projects written on sticky notes that need to be completed to keep my house in tip top shape. The active sticky notes live in either the “Getting to It” (To Do) column. the “On It” (Doing) column or the “Put a Fork in It” (Done) column. I rather enjoy using sticky notes for this process because there’s nothing more gratifying than moving a task upon completion to the “Put a Fork in It” column.

With my husband’s input, we regularly populate the Honey Do List from items (Stories or sometimes Epics) from our Honey Wish List, which (as PO) I keep prioritized so it’s clear what I want done next. My husband and I both add to the Honey Wish List regularly, making sure to note any contingencies involved in completing the given project (such as buying shelving for the Organize the Garage story), as well as an expectation of ‘Done’ (which we sometimes debate when said project rises to the top of the prioritized list and is ready to be shifted from Honey Wish to Honey Do).

Is There Scrum in Your Real Life?

I bet there is. Share your examples with us in the comments below. It’s the Scrummy thing to do.