The Scrum Team vs. The Development Team

What is the difference between The Scrum Team and The Development Team and how does that help?

Juliet, from Romeo and, once eloquently asked, “What’s in a name?”1  The 3Back Team has taken her beautiful soliloquy a bit out of context to answer her famous question. Our answer? “A lot, Juliet. A lot.”

In Scrum, names matter. They add clarity and help define accountability. Which is why we designed our latest infographic to illustrate the difference in some important names. Scrum Team vs. Development Team. 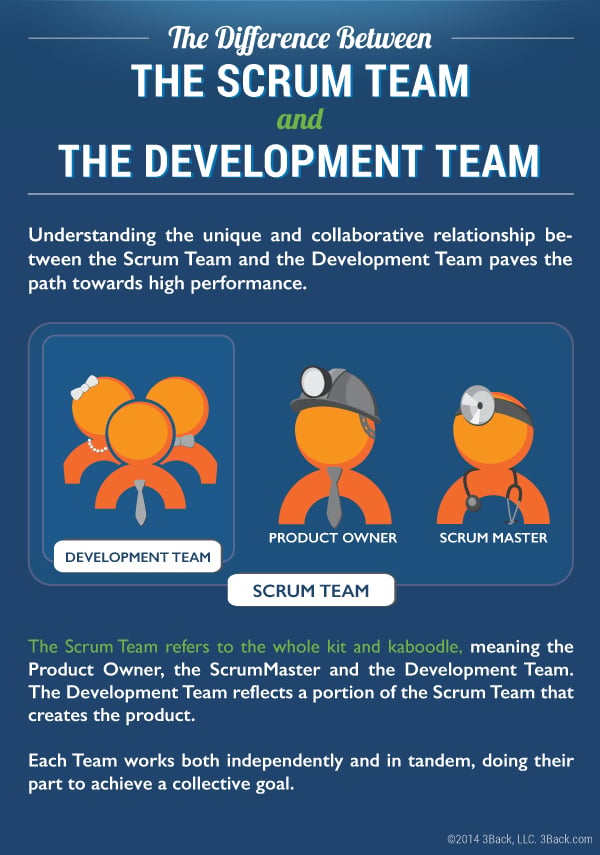 Scrum Teams are people with skills, not people playing roles. They are relatively small, usually having  between three and ten people, although larger (and smaller) teams are sometimes necessary. Scrum Teams are self-organized and cross-functional, which is a fancy way of saying that the Team figures out how to do its work, manages itself as it does the work, and has all the skills it needs to get the work to Done. Remember, a Well-Formed Team is the Scrum Master’s product and a primary goal.

The Development Team is the portion of the Team that develops or creates the product. Each Team works both independently and in tandem. When Scrum is really working well and Teams are performing at a high level, everyone does their part to achieve a collective goal.

Future Use of Development Team

In the latest version of the Scrum Guide, the term Development Team has been removed. The term now being used We are happy to see this change and have always supported a single team concept when describing Scrum. It makes things confusing when you describe a team inside a team. However, our infographic still shows the concept since many people still like to think of scrum in this manner. You will see the language retire in coming years as the term Development Team is phased out.

As the infographic illustrates, the Scrum Team refers to the whole kit and kaboodle, meaning the Product Owner, the Scrum Master and the Development Team.