Team swarm is an observable pattern of cohesive team work. The word swarm is the right word because to an outside (outside: someone not directly on the team doing the work) observer the pattern almost looks random. However, to those on the team they are moving with intent and purpose even though the observer cannot easily discern why they are focused the way they are. See Starting Scrum Pattern for Well-Formed Team

Well-Formed Teams will exhibit a team swarm pattern after they mature. A good sign of your team maturing is that they tend to swarm and jump on work together and often one story at a time. This is an observable point of view that the Scrum Master can use to detect when his/her team is starting to work well together. To an untrained observer this will be a sign of chaos and the tendency is for them to step in and clean up mess “who’s in charge here anyway” or “this needs to be tidy’ed up”. These types of management practices are anathema to a good agile scrum team and interfere with it’s ability to self organize.

The pattern of team swarm is generally observed for teams when strong task orientation is present. Scrum teams are often working on software development problems that require a team head to work through. The Product Owner, in scrum, provides the direction or line of purpose for the team.

Great project management recognizes team swarm and is good at stimulating the environment to encourage small team tactical behaviors. A competent agile project manager will not usurp the teams work pattern to fulfill a desire to know what is happening. This means that reporting of work done on the agile team is incumbent on the team members to make it visible. Therefore a great leader charges the team with the constraint to both make it visible internally so that common task orientation and make it visible externally so that reporting/decision making can be supported. 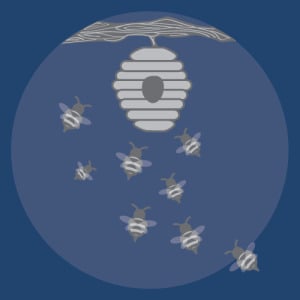 The team swarm pattern is critical to decision making. Tactical agility (team level agility) can result when the work is visible and an emergent adaption can occur. Externally there is a need to supply concrete realities the team encounters to inform and enable strategic agility. Again this informs decision making both internal and external to the team. A trained agile project manager will know how to stimulate team behaviors without compromising the team’s need to self organize and simultaneously feed that information up the decision making apparatus of the organization so that strategic agility can happen. The result is a bidirectional flow of information. Team swarm is one way to know you are on the road to making that happen as smart as possible.