Some fundamentally disagree with this statement. For those that disagree Trust is given freely. They give trust freely until such time as a person irrevocably betrays that trust.  They believe that this leads to a method of management that creates hostile antagonistic workplaces rife with fear. A pattern of mistrust is established that leads others to be mistrustful and perpetuates a negative cycle of oppression.

I would agree that it sets up a behavior pattern that is negative and learned. However when I am asked to just trust someone this feels wrong to me. It’s not that I don’t trust them or do trust them It is more that I have no reason to trust them. For colleagues at work I have evidence to suggest that they won’t attack be suddenly with a gun or knife. So I trust them not to do that. However, for a man who steps out suddenly from a darkened alcove in a lonely ally… I don’t trust him that far. Why? I have no data to suggest that pattern of behavior is appropriate in that context.

So I propose that trust is earned not given freely. Most people conceptualize trust as a bank account +- (data from cognitive psychology).  So how do we open an account and start filling it?

Think of trust as a Trust Loop and visibility as the key to seeding that loop. I make shared work or activity visible so that we can do something/anything together. 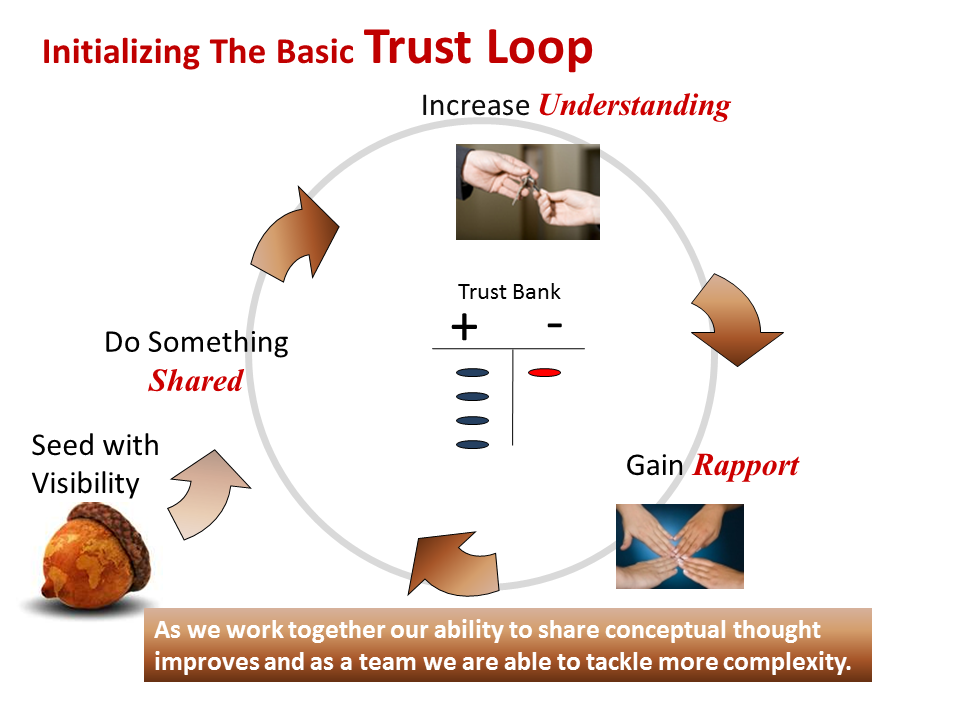 Trust is earned. Anything else is what I call faith. I avoid using faith (blind intuitive leaps) for what should be an empirical approach. Now you might argue I should have enough evidence to be comfortable with something and should trust them. Truly, if I can find the data and convince myself without spending too much time, then I will. But, please let’s not argue about lack of trust. That makes me crazy and I see it too often as a bullying technique to beat someone down or attack their value system because you don’t agree with them.

Scrum Values and I propose another

Visibility is valued by me because it allows me to seed the trust loop. Once I can see or have experienced working with someone on anything my trust account grows. It takes time to know and grow a relationship. As the relationship grows it becomes easier to work with that person and make bigger leaps of understanding based on previously established rapport.

Hence my rule: Make it Visible

Make it visible is one of my foundational legs that the Scrum framework rests on.