How does feedback happen on your Team? A Scrum Team member recently told me that she receives feedback anonymously from her Teammates and the business as a whole, so she’s never told who made what comment in their feedback process—that’s normal in their organization. As someone who has facilitated numerous feedback processes, this surprised me and raised some useful questions for Scrum Masters and Team Leaders. This post unpacks common pro or con assumptions regarding anonymous feedback.

I spoke to some colleagues and noticed a few common assumptions. For example: “Anonymous feedback is more objective because egos aren’t involved.” On the other hand, someone else said, “Giving anonymous feedback is a cop-out! If your feedback is legitimate, you should be able to say it to the person’s face.” Yet another assumption I encountered is that “anonymous” feedback really IS anonymous! Meaning: nobody knows who made specific comments.

As I will discuss, all of these assumptions are questionable.  I will propose that there isn’t a one size fits all answer to anonymity: sometimes concealing the source of feedback can be a plus, sometimes not. If we’re talking about a Team that is intended to be highly collaborative, the answer may hinge on what’s the maturity of the Team and what the circumstances in which feedback is being solicited? And equally importantly, who is going to have access to the feedback?

To start with, let’s talk about the phrase “anonymous feedback.” In terms of the ethics of asking people to give honest feedback anonymously, feedback is only truly anonymous if no one with power over the receiver, and the receiver themself, has access to the names of who gave what feedback.

It’s pretty common to hear stories from people who were asked to provide “anonymous feedback” and afterwords were called in by their boss to discuss the details of what they said. The temptation to break the promise of confidentiality is understandable—there might be some juicy stuff in those comments!—but doing so undermines trust in the process. It would naturally make anyone edit themselves next time, thereby undermining the whole exercise. So my first recommendation to leaders is: if you advertise the process as anonymous, be very careful to ensure that those boundaries are actually kept, don’t violate them! You’re trying to build trust.

That said, invariably, when I’ve facilitated feedback processes, the recipient of anonymous comments spent real energy trying to figure out who said what? For example, an Executive Vice President I worked with prided himself on always being able to identify the source of every line of feedback in his 360-degree survey. This sort of thing is typical: it’s only human to want to understand who’s talking about us. Moreover, the concrete comments often provide the greatest value because they’re closest to real life, the best mirror of what we’re doing effectively or ineffectively, and therefore most actionable.

And this points to one of the situations in which anonymous feedback can genuinely be useful: if the pool of respondents is large enough to ensure anonymity. A company-wide survey, for example. So particularly when seeking a broad range of feedback from across an organization and looking for constructive advice and observations, anonymity might be a useful strategy.

Knowing the authors of comments is a double-edged sword. As a colleague of mine in the medical field mentioned, you might be tempted to dismiss critiques if you’re able to figure out who said what. Whereas if the feedback is genuinely anonymous, it might be easier to let critical comments stand on their own and weigh them more objectively. Of course, the opposite might also be true: if I know or can guess the identity of who gave me a particular piece of feedback, I might take their constructive criticism or their kudos more to heart precisely because I know who it’s coming from. And that might be because I trust them, respect them, and value their thoughts, or it might be because they have influence in the business, power over my current job, or a say in my future advancement.

On the other hand, making feedback anonymous does not necessarily make it more objective! That’s an unwarranted assumption. The mask of anonymity might just as easily make it possible for people to make baseless or casual criticisms, relying on the fact that they’ll never be held accountable for the accuracy of their remarks.

What if we limit feedback to answering multiple-choice questions? Likewise, that doesn’t ensure more objectivity; it just ensures less detail! Personally, I would always err on the side of more detail, as those examples are likely actionable or may provide a reflection on actual events for the recipient to digest.

Give it to me straight

Now we might make the opposite assumption: that if people have legitimate criticisms to make or suggestions to offer each other, they should be willing to stand up and say it directly—that is, with their name attached. This would be my usual assumption. As my colleague Brett Knowles said, if Team members can’t give direct feedback, “this means that every single daily standup is a waste of time!”

So let’s think about a small Team. Not just any Team: a Team that is called upon to be highly collaborative due to its very mission. Does anonymous feedback defeat the purpose of that collaboration? Does it undermine the transparency we would want to encourage on a self-organizing Team? Shouldn’t people be expected to speak their minds on a Scrum Team? 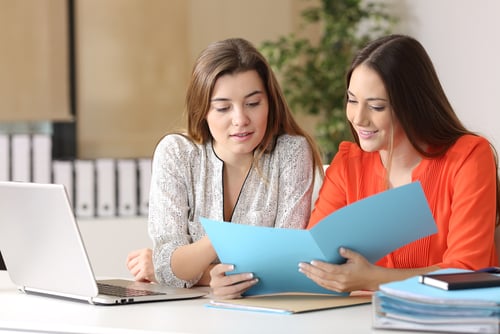 Well, my answer is: that depends on the Scrum Team and its level of maturity. By “maturity,” I don’t mean the personal maturity of each Team member as an adult. I mean how far along the learning curve that group of people is in working through difficulties and learning how to “Team“ together.

I can imagine a situation in which a new Scrum Team has been assembled with people who have not collaborated before or don’t have a track record of working through conflicts. In this scenario, the Scrum Master or Team Leader decides that the first rounds of feedback will be anonymous.

On the other hand, I can also imagine a new Scrum Team in which the Scrum Master or Team Leader facilitating the feedback process has a good sense of each individual. In this scenario, the Scrum Master or Team Leader would rather bank on their ability to take the feedback personally than feel the need to use anonymity. Either case is an experiment, and whoever runs the feedback process should take a moment to retrospect afterward on the success or limits of the path they chose.

What I’m trying to point out overall here is that getting locked into a single, dogmatic way of doing feedback risks missing the Team’s present-day needs. Circumstances change, the purpose of asking for feedback changes, the work context, the interpersonal contacts, etc., are dynamic.

There’s no doubt that it’s important to build transparency and openness in communication on a collaborative Team. On a Scrum Team, it’s going to be next to impossible to truly maintain anonymity, in the sense that it’s going to be fairly easy over time to learn how to guess who said what. But even with those hunches, with a young Team, it might make sense to focus on the objectivity of feedback in a way that de-personalizes it.

Finally, let’s come back to the question of what is feedback for? Presumably, the purpose of feedback on a Team is to ultimately enable the Team as a whole to perform better. And this is going to be accomplished by helping every individual to do their part more effectively. Feedback aims to provide a constructive assessment of people‘s actions, not their personal essence. But it’s not so easy to divorce critiques of our actions from critiques of who we think we are.  Sometimes anonymity might be handy, even if we’re working toward a norm of face-to-face feedback as integral to our daily communication with each other on the Team, something that doesn’t require a “feedback” process to invite.

Interested in Improving Your Scrum Team’s Collaboration, Communication, and Feedback?