Something Wicked This Way Scrums

In the spine-chilling spirit of this Halloween season, we offer you our spookiest of Scrum Infographics. Grab your goblet of witches brew from the nearest cauldron and enjoy our bone tingling cautionary tale of 5 eerie personalities that haunt many a Scrum Team. ScrumMasters heed our warning, for you hold the power if used wisely, to ward away this evil from your Team. 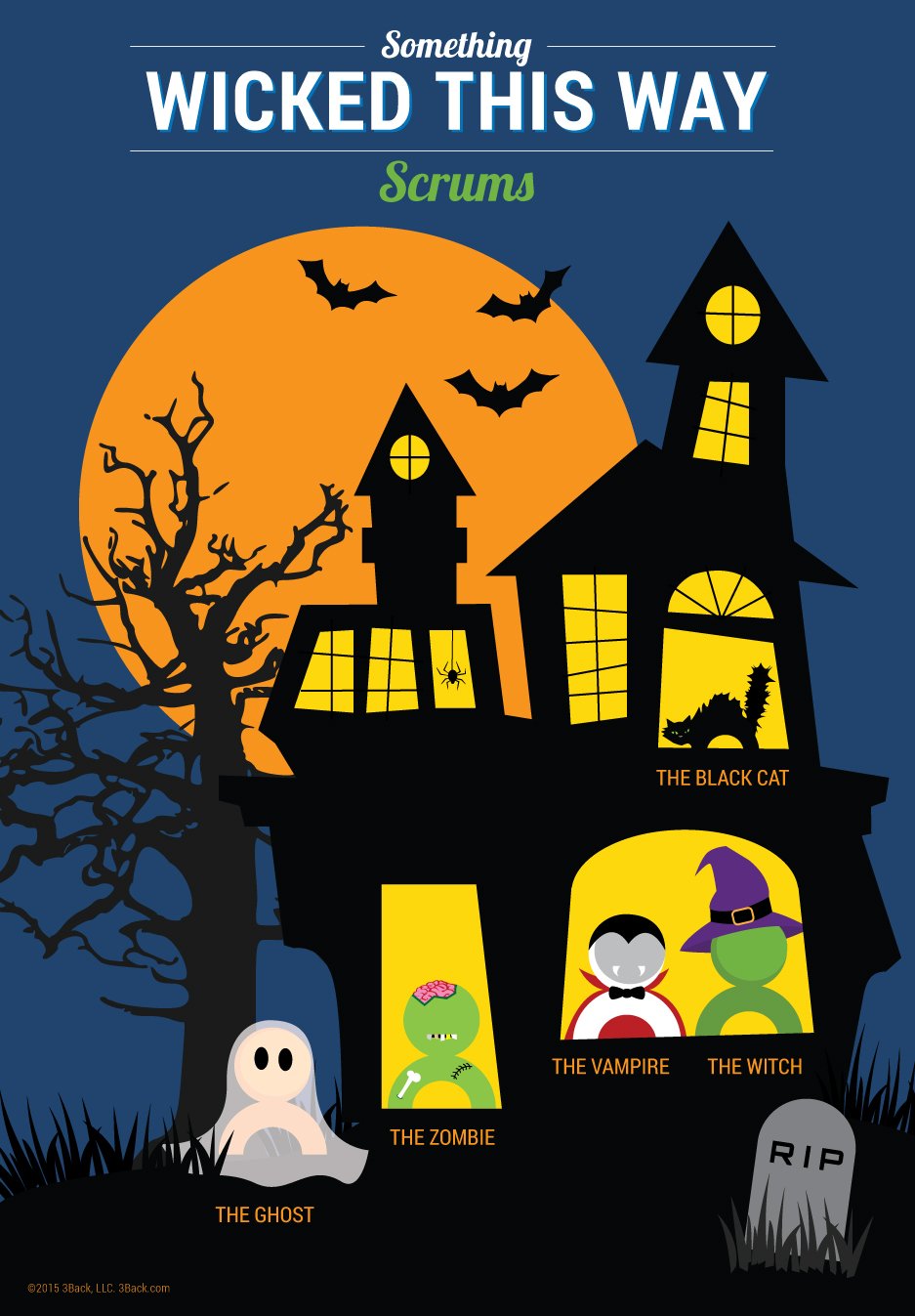 The Team’s resident Zombie is that lifeless character that is physically present at Scrum ceremonies but is completely disengaged and disinterested and left staring meaninglessly off into the distance. You can count on the Zombie for no input, no feedback, no nothing. ScrumMasters: Get creative and explore new ways to engage the Zombie on the team.

Always quick to cast a spell or dish a backhanded insult your way, the Witch has several tricks up her (or his, in the case of the Warlock) sleeve. None of these tricks serves the Team. Rather, these tricks usually involve a very personal hidden agenda meant to derail the Team at every turn. ScrumMasters: Eyes on the prize. Keep the Team focused on the task at hand, not on the Witch’s musings.

The Ghost wins the title of the most passive-aggressive of personalities. The Ghost works invisibly, with anything but transparency. All of a sudden, the Ghost’s work magically appears. The Ghost delights in these types of surprises and delights in the havoc they wreak for the Team. ScrumMasters: Make it visible. Employ Information Radiators for the Team to see all work at all times.

The Black Cat, when not crossing someone’s path, provides that naggingly superstitious voice to the Scrum Team. The Black Cat operates out of a place of fear, incessantly reminding the Team that, “That is not how we do things.” The Black Cat actively shuns creativity and innovation; preferring to do the same old, same old, even if it provides unsuccessful results. ScrumMasters: Keep the Black Cat as quiet as a mouse while getting to the root of the feline’s fear.

The Vampire may initially appear to be rather charming and helpful to the Team. But there’s more to the Vampire than meets the eye. No matter the project, no matter the process, the Vampire has a way of sucking the life force out of the Team in one quick bite. Sure there’s no telling marks on anyone’s neck, but there might as well be. The Vampire is a killer, draining the Team of its energy any chance he or she gets. ScrumMasters: Turn the tables on the Vampire, enlisting the bat to problem solve rather than push the Team into an endless downward spiral.

Beware of this macabre mix of characters who appear from the shadows of your Daily Standup, bringing doom and gloom to ScrumMasters, Product Owners and Dev Teams alike.

Want to ward off the witching hour with your Scrum Team?
We’ve got training and coaching for that.